Evidence that the majority of the public were yesterday complying with regulations on restricting movement has not prevented the continuing warnings that tougher rules are on the way.

On the BBC’s Andrew Marr programme, Health Secretary Matt Hancock suggested the possibility of an outdoor exercise ban after people were seen sunbathing in parks.

There has been widespread frustration over the decision to close Brockwell Park, a 126-acre public space in south London, from tomorrow.

Lambeth Council said in a tweet that this was because “over 3000 people spent today in Brockwell Park, many of them sunbathing or in large groups. This is unacceptable. Unfortunately, the actions of a minority now means that, following police advice, Brockwell Park will be closed tomorrow”.

If this number of people were present in the park, they would have had 170 square metres each to maintain physical distancing rules.

In any event, government guidelines on access to green spaces do not prevent people going to parks: they instead say, “gatherings of more than two in parks or other public spaces have been banned and the police will enforce this”.

If there’s anyone out there still arguing that the government’s advice is ‘perfectly clear’, here is the government at 13.38 saying ‘by all means still go to the park’, and then the government a little less than two hours later saying ‘GOING TO THE PARK WILL KILL PEOPLE’: 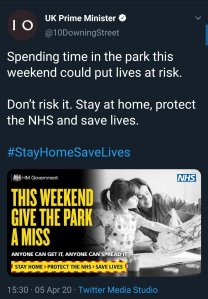 In response to coverage by Sky News about whether people were generally obeying the social distancing advice, Netpol highlighted what it called a “frightening prospect” that one officer in the news item was “making a wholly subjective medical judgment – refusing to believe a man sitting alone has sciatica and is in pain” and soon was “likely to decide whether to detain people who “may be infected” by the coronavirus”.

Outside London, Gloucestershire Police were ridiculed for “gallivanting” around parks on quad bikes in search of people flouting the government’s lockdown rules.

There is also evidence that evictions of squatters have continued despite a government moratorium, with the full support and cooperation of Sussex and Metropolitan police officers in attendance.

Policing the pandemic. a Canadian initiative – Interactive map tracking charges and violations related to COVID-19, by Alex McClelland and other graduate students in Ontario with a history of working on HIV/AIDS, public health, drugs and surveillance issues. (h/t Aziz Choudry)

COVID-19: Emergency Measures Tracker. Put together by a law firm, the tracker closely monitoring updates from governments across Canada as they respond to the pandemic.

This site uses Akismet to reduce spam. Learn how your comment data is processed.