Data released by the National Police Chiefs Council has confirmed that not one single person was fined by police in England and Wales for breaching quarantine rules requiring people arriving in the UK to self-isolate for 14 days, over the first two weeks since these rules were introduced.

The figures also show that between 23 June and 6 July, the number of fixed penalty fines issued in England had fallen to 97 and to 57 in Wales. Up to 22 June, 10 fines were also issued across England and Wales regarding face coverings on public transport regulations. All fines were issued by British Transport Police. 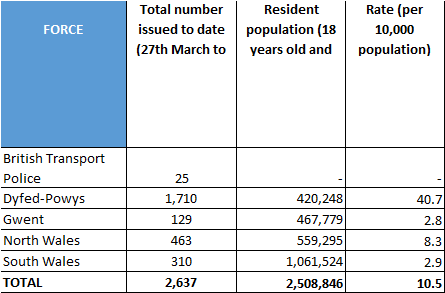 Data on the ethnicity of those who have been issued a fine indicate that around one in eight (12%) were given to those identifying as Asian and 4% to those identifying as Black. These figures do not include 16% of fixed penalty notices where the ethnicity of the individual issued with the notice was unknown (17% for England and 7% for Wales). The full breakdown of these statistics is available here (PDF).

Black people in London are four times more likely to be tasered and were twice as likely to get a Covid-19 fine. David Lammy, MP for Tottenham, summarised the government’s policy on tackling COVID19, saying: ‘Shocking statistics showing disproportionality require action. This must be a turning point’. The Guardian in an editorial says London’s top police officer is in denial about a counterproductive stop-and-search policy

The next battle over enforcement of coronavirus rules seems likely to centre on the wearing of face masks in shops, which the government has indicated is likely to become compulsory in England and Wales on 24 July. The Sunday Times reported retailers are reluctant to enforce these rules “because they do not want shop staff to have to act as store detectives”. The Metropolitan Police Federation has, meanwhile, called the rules “unenforceable” and said, “we can’t drive around looking for people not wearing masks” (although past experience documented on this blog suggests this is exactly what we may see). In Scotland, where face masks became compulsory on Friday, people must wonder what all the fuss is about: it was reported that there was “extremely high” compliance with the new regulations and no fines were issued.

Meanwhile, the focus of policing health regulations has remained on large gatherings. Dispersal powers were used by South Wales Police on a group of about 200 young people gathered for a party at a Gower beauty spot, while there were confrontations with police in Shoreham in Sussex and West Midlands Police broke up an unlicenced rave in Walsall.

This site uses Akismet to reduce spam. Learn how your comment data is processed.